What is Sea Holly?

Sea Holly (Eryngium spp.) is a branching herbaceous perennial. It is part of the Apiaceae family and most are native to Europe and the Mediterranean. Sea Holly is a hardy perennial with thistle type foliage coloured green or silvery-blue. Some varieties are evergreen, while others will go dormant in Winter. There are Summer flowering Sea Hollies as well as Winter flowering varieties. Depending on variety their flowers are green or blue cones that look like raspberries that are surrounded by spiky silver, white, green, blue or violet bracts. Sea Holly thrive in the full sun and are not usually fused about soil type. They have a long taproot which helps the plant to thrive in poor soil and low water conditions, however it makes it difficult to transplant established plants. They are frost tolerant and drought hardy plants once established.

Once established Sea Holly requires very minimal care and require little water. They can be used as an unusual feature plant, in beds and borders, or in butterfly gardens. They are also ideal for pots and containers. The Sea Holly flowers are good as fresh cut flowers and make superb dried flowers too. They attract butterflies and bees into the garden.

How to Grow Sea Holly 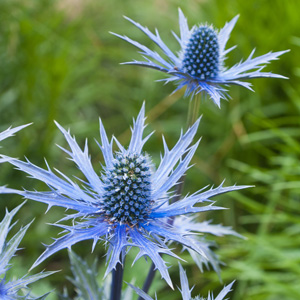 When To Plant Sea Holly

Plant anytime. If growing from seeds sow in Autumn or Spring.

Sea Holly will tolerate poor soil conditions very well. They perform best when planted in a well drained fertile soil. Prepare the soil with some well broken down animal manure or all purpose fertiliser prior to planting.

How To Plant Sea Holly

Plant in full sun, 45cm apart with the plant crown at soil level.

Water well until plant is established. Once established, water only during dry spells.

Mulch plants to keep the shallow roots cool in Summer.

Fertilise annually in early Spring with a general purpose fertiliser.

Deadhead by pinching or cut off spent flowers to encourage additional blooming. Remove the flower stems once its blooming period ends in Autumn, but allow the evergreen leaves to remain.