Phormium (Phormium tenax) also known as New Zealand Flax is an evergreen clumping perennial. It is part of the Agavaceae family and is native to New Zealand and Norfolk Island. Phormium produces long, grass like, upright arching foliage that is sword shaped. There are many cultivars available in a wide range of colours and sizes. The foliage colours range from green, yellow, pink,  red, orange, burgundy and bronze tones with many two tone variegated varieties. The colours of the foliage intensifies when position in full sun. They can be grown in part shade but the leaf colour will be duller. Phormium flowers in Summer. Mature plants produce flower spikes which shoots up above the foliage and produces yellow or red blossoms. Seed pods form on the spikes after the flowers have fallen This is a slow growing plant and requires protection from harsh winds until they get established. Phormium will tolerate heavy frost and is moderately drought tolerant.

Phormium are a colourful and a spiky ornamental plant suitable for perennial gardens and coastal areas. The taller varieties looks excellent when planted en masse, or as single specimens in pots or garden beds. The dark foliage varieties creates a strong contrast when interplanted with other coloured foliage plants. Their flowers attract nectar feeding birds such as honeyeaters.

How to Grow Phormium 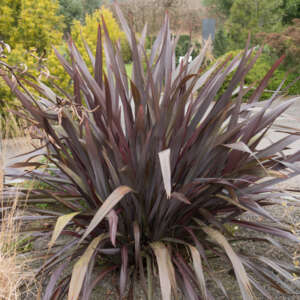 When To Plant Phormium

They will grow in any soil type though they like the soil to be moist and well drained. Mix through some well broken down compost before planting. Heavy clay soil can reduce growth.

How To Plant Phormium

Plant in full sun to part shade, with the plant crown at or slightly above soil level. Spacing of plants differ on variety.

Water well until established. Then water when normal rainfall isn’t sufficient. They need to be watered regularly during the Summer.

Use a slow release fertiliser in Spring.

Remove older leaves as required. Cut back halfway every 4-5 years to freshen up the plant.

Propagate by dividing clumps in Spring. 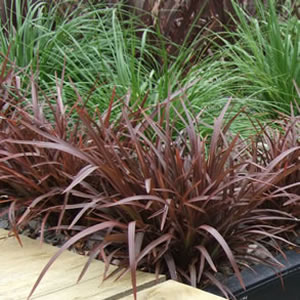