Ixia (Ixia maculata) also known as Corn Lilies or Wand Flowers is a hardy corm perennial that is well suited to the warmer climates. Part of the Iridaceae family which includes Iris’, Ixia originated from South-Western Africa. They have fine grassy foliage and masses of starry brightly coloured flowers with even brighter markings on tall arching stems. Their flowers come in a range of colours such as white, orange, red, purple and yellow blooms which have a dark center. Ixia flower late in Spring into early Summer. This late flowering season bridges the gap between the Spring flowering bulbs and the Summer flowering perennials. Water well in Spring but allow to dry off after flowering.

Ixia make great cut flowers courtesy of their tall strong stems. The blooms will last up to two weeks in a vase. Plant Ixia at the front of a bed, as part of a lawn planting or in a container. Like most Spring flowering bulbs, Ixia look best when planted in clumps, so if you are putting them in the garden/lawn, put three or five in each hole for the best display.

How to Grow Ixia 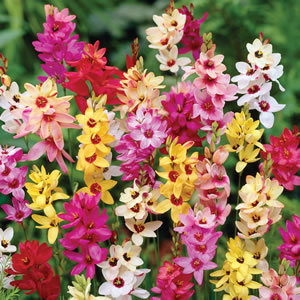 Cool to subtropical. They tolerate temperatures down to 0°C.

When To Plant Ixia

Ixia like a well drained soil. Work well broken down animal manure or compost into the soil before planting.  If soil isn’t particularly well-draining sprinkle some sand under them before planting.

How To Plant Ixia

Plant in full sun, 5-10cm apart with the bulb at a depth of 5cm with the pointy end facing up.

Start watering when growth appears in Spring and keep soil slightly moist until foliage dies off after flowering. It is ideal to keep bulbs relatively dry whilst dormant so they do not rot.

Ixia can generally be left undisturbed for many years. If clumps become too congested then they can be lifted once foliage turns yellow and replanted in Autumn. This may happen around four or five years in the ground.

Adding a little general purpose fertiliser as they begin to bloom is recommended. but otherwise they require very little fertiliser.

Watch out for snails and slugs when new shoots appear.