Heuchera (Heuchera  spp.) also known as Coral Bells, Alum Root, Rock Geranium is a clumping perennial. It is part of the Saxifragaceae family and is native to Northern USA and Mexico. They are evergreen in all but the coldest of climates. Heuchera make neat clumps with attractive deeply lobed foliage that comes in a variety of colours. Vibrant lime green, chocolate brown, reds and burgundy, deep purple, two tone and more are just some of the range that these colourful foliage plants come in. From late Spring until to Autumn Heuchera bear erect wiry stems with tiny flowers, that are usually in shades of white, cream, or pink.

Heuchera are hardy and very easy to grow. They are ideal for borders, tub planting, in a rock garden, or for planting underneath medium sized shrubs or trees.

How to Grow Heuchera 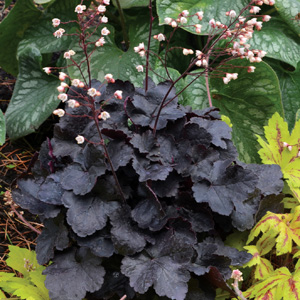 When To Plant Heuchera

Plant in late Winter to Spring.

They like a rich, well draining soil. Incorporate well broken down compost or manure into the soil before planting.

How To Plant Heuchera

Plant in full sun to part shade, 30-40cm apart with the plant crown at soil level.

Keep them moist whilst growing. They will appreciate regular watering during dry periods.

Apply a slow release, balanced fertiliser annually in Spring before the flowering period.

Some gardeners like to divide and replant them every few years to maintain freshness and vigorous growth. Division is best carried out in Autumn or late Winter.

Watch out for snails, slugs and aphids. They can also be susceptible to fungal attacks like grey mold.

Heuchera are hardy, easy to grow plants that have attractive foliage with a large variety of colours. 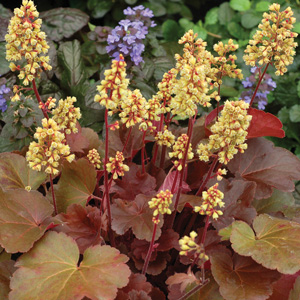 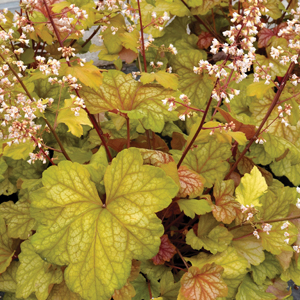 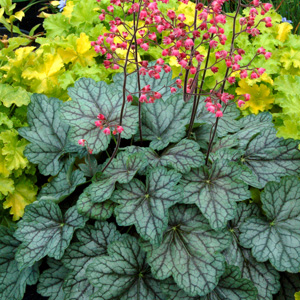