What is Ginger Lily?

Ginger Lily (Hedychium spp.) are ornamental gingers that are rhizomatous perennial herbs that form an upright habit. They are part of the Zingiberaceae family and are native to India, Bhutan and Nepal. Gingers lilies have a number of different species, and vary in size and growth habit. They flower in Summer to Autumn with tall spike like cluster flower heads which come in a variety of colours such as yellow, orange, pink and white. The flowers are fragrant. Once the flowers have finished oval green capsules appear which carry red and sticky seeds. Rhizomes produce unbranching canes throughout Spring to Autumn months before going dormant in Winter. The canes carry dark green glossy foliage that is long and lance shaped which gives off the tropical vibe. Ginger lilies prefer and grow best in semi shade but will tolerate both full sun and full shade. They are frost and drought tolerant.

Ginger Lilies are very hardy plants that can add a tropical look to cool climate garden. With their attractive foliage and large flowers it is often used in shady and sheltered areas of tropical or semi-tropical gardens. The flowers are highly decorative and fragrant making them ideal for a scented garden. Put one of the flower spikes indoors in a vase, it will last for ages, and the smell will pervade the whole house. Ginger lily flowers also attract bees, butterflies and nectar seeking birds to the garden.

How to Grow Ginger Lily 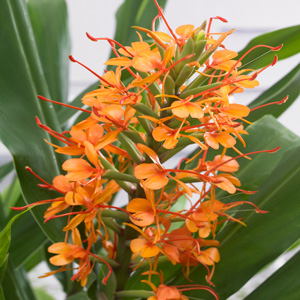 When To Plant Ginger Lily

Plant in Spring once the last frost has passed.

They like well drained soil. Incorporate well broken down animal manure, blood and bone or compost through the soil prior to planting.

How To Plant Ginger Lily

Plant in semi shade to full sun, 45cm apart with the rhizome 3 to 4cm below the soil surface.

Regular watering is required as ginger lilies like to be kept moist.

A top dressing of fertiliser in Spring is recommended.

Stems should be cut off when flowering has finished. Clumps can be lifted and divided during Winter months as the clumps become crowded. If unable to replant immediately, they can be temporarily stored in peat moss. The outer canes without the support of the central canes tend to lean out and may need cutting off early if they are encroaching on paths or other plants. Remove flower heads after flowering before the seed pods appear to prevent the dispersal of seed. Cutting stems off once flowering has finished can also promote additional flowering and growth.

Watch out for snails and slugs. 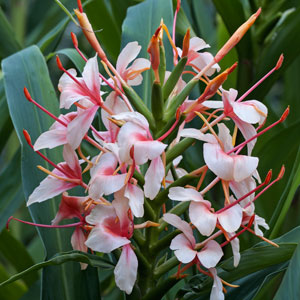