What is Elkhorn Fern?

Elkhorn Fern (Platycerium bifurcatum) is an epiphytic fern that tends to grow in small communities. It is part of the Polypodiaceae family and is native to Java, New Guinea and Eastern Australia, in New South Wales, Queensland and on Lord Howe Island. The Elkhorn name comes from the look for the large fronds that look like elk horns. Elkhorn Ferns are made up of 2 leaf types: broad heart-shaped sterile fronds which are used to attach itself to where its growing, eg trees, backing boards, etc, and long arching grey-green fertile fronds which are forked and strap-shaped which cascade down. Elkhorn Ferns can be attached to trunks of other trees or mounted on a backing board and then attached to a wall to enable easy maintenance. They need a light shade position with patches of sunlight and needs is be protected from the frost.

Staghorn Ferns are very similar to Elkhorn Ferns. Staghorn Ferns Platycerium superbum have larger shield type leaves and the branching antler style on top. As the plant matures some antler style leaves will form in the middle and cascade down. The Staghorn Fern is one single plant (single eye) where the Elkhorn Fern is made up of many smaller plants (multiple eyes). The easiest way to distinguish between the two types of fern is that Elkhorns have many plants growing together in communities and they have smaller, slender fronds. Whereas Staghorns tend to grow as larger individuals. Staghorns and Elkhorns are epiphytic, which means that they grow on another plant but don’t get food, minerals or water from the host plant. They take their moisture from the air, rain and decaying matter around the plant.

The Elkhorn Fern is a truly spectacular looking fern that despite it’s exotic appearance is very easy to grow. Use the Elkhorn to add a tropical and rain-forest feel to shady gardens, water features and patios.

How to Grow Elkhorn Fern 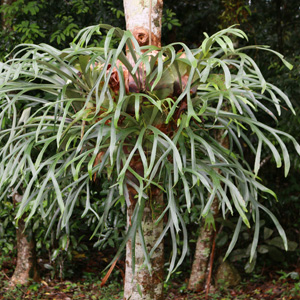 When To Plant Elkhorn Fern

Use sphagnum moss between the plant and the backing board/tree.

How To Plant Elkhorn Fern

Choose a place in the garden that gets filtered sun and is protected from the afternoon sun.

They do need regular watering, especially in dry conditions. A good soaking once a week during warm weather is needed, hold back a bit in cooler weather. Ensure that the plant is not allowed to dry out and keep moist.

Until the backing fronds have completely enclosed the root, the root can be fed with leaf litter, tea leaves and banana skins, etc. Once the root has completely encased the board it can no longer be fed and will feed itself.

You can also feed these ferns with seaweed fertiliser, but only use at half the recommended strength because they don’t like too much food and artificial fertilisers can burn the fronds.

If these get too big they can be divided and the pups attached to new backing boards.

They are not prone to attack from many pests and insects, but may be preyed upon by scale bugs and mealy bugs.