By GE CustServ on January 10, 2020 in Uncategorized

Bulbs are known for producing some of the world’s most prized perennial flowers. Less well-known is the range of other underground stem types, which offer everything from showstopping flowers and ornamental foliage to a variety of edible produce and sought-after culinary flavourings.

Understanding the differences between these plant types gives insight into their growth cycles, which in turn informs planting and propagating technique. It’s therefore worth your while to explore the different types of underground stems that might be masquerading as bulbs in your backyard.

So, what is the difference between bulbs, corms, tubers and rhizomes? Let’s get some answers.

What is a bulb? 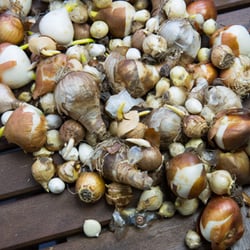 A bulb is composed of a series of rings known as scales. These are actually modified leaves that the plant uses to store food during the plant’s dormant phase. Bulbs grow new scales from the inside each year, which gives rise to a perennial growth cycle.

Bulbs have a rounded shape, narrower towards the top, and a flat base called a basal plate. This is where the roots, shoots and scales emerge from. New ‘daughter’ bulbs also develop from the basal plate. Leaves and flower stems grow from the top of the bulb before emerging above soil level.

Examples of bulb plants include tulips, daffodils and hyacinths, along with onions, shallots, chives and leeks.

What is a corm? 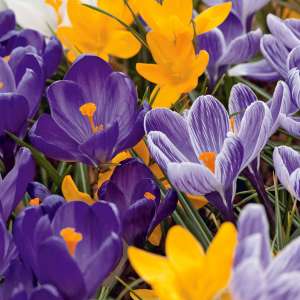 Corms are similar to bulbs in their function, and they have the basal plate (see above) in common. The key difference between corms and bulbs is that corms do not have rings, instead consisting of a single, homogenous piece of stem tissue that stores energy during the plant’s dormancy.

With each flowering, the energy contained in the corm is completely depleted, and a new corm forms on top of the old one to replace it.

What is a tuber?

Like bulbs and corms, tubers store nutrients for a plant. A key difference between corms/bulbs and tubers is that tubers do not have a basal plate. A special feature of tuber plants is that they can propagate genetic copies of themselves, which emerge from sprouting nodes known as ‘eyes’.

Some types of tubers have a generously sized, starchy form that has made them an important staple food in many parts of the world.

Examples of tuber plants include cyclamens, dahlias and potatoes.

What is a rhizome? 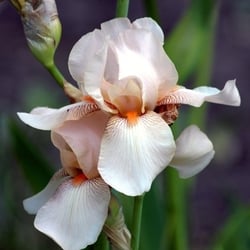 Rhizomes are underground stems that, like bulbs and corms, serve as nutrient storage for a plant. Like tubers, they do not have a basal plate. A key difference between tubers and rhizomes is that rhizomes grow horizontally, branching out to develop new roots and shoots over a larger ground area.

Many rhizome plants can rapidly populate a large ground surface area (as with bamboo), while others have a clumping habit and spread more slowly (as with the bearded iris).

Rhizome plants include Iris species, canna (or canna lilies) and ginger, along with grasses such as bamboo and lomandra.

What is a stolon?

Stolons, often called runners, differ from the other entries on this list by the fact that they occur across the above categories. They can also be found on plants that do not have underground stems, such as strawberries, in which case they may grow at soil level rather than underground.

Some plants that do have underground stems, such as irises, can also have soil level stolons. Others, such as potatoes, produce stolons underground. In any case, stolons produce new plants – clones of the original or ‘mother’ plant – from nodes spaced at intervals over their length.

Strawberries, such as Strawberry Tioga and Strawberry Adina, are a good example of plants with runners. Many grasses and groundcovers have stolons, as do mint, potatoes and irises.

Ready to dig in?

Plants with underground stems are an endless source of enjoyment for gardeners, with fascinating growth cycles that offer huge scope for perennial and seasonal plantings. Many are easy to grow, readily naturalising into gardens through their own propagation.

Garden Express has a huge range of bulb, corm, rhizome and tuber plants to explore – check out some of the examples above to get started.