Rose rust is a disease caused by the Phragmidium tuberculatum fungus. While rose rust only affects roses, there are nine different species of rose rust. This particular rose disease can be the most frustrating for gardeners to combat because not only does it ruin the appearance of the roses, but it will also eventually kill the rose bush if it is left untreated. 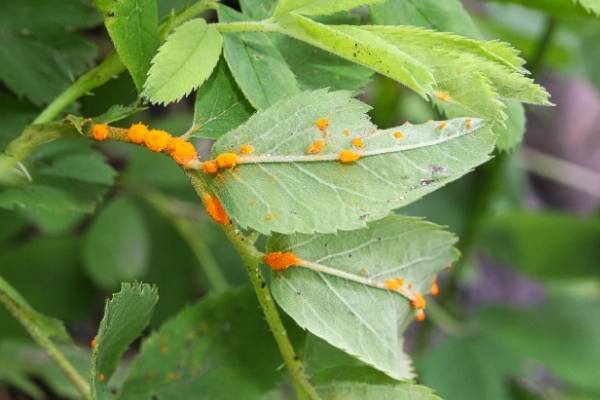 The best time to start treating and curing rose rust is as soon as you notice any symptom. Catching rose rust early in the infection means that it will be easier to salvage most of your rose bush and prevent the disease from spreading.

Rose rust is caused by fungal spores that spread through the wind. These spores can survive throughout the winter on soil or fallen debris but symptoms will lay dormant.

In early summer the symptoms will evolve from small rust-coloured patches on the stems and leaf stalks to more obvious spots on the leaves. As the infection progresses leaves will fall and in late summer will turn into black pustules.

Rose rust will appear as either rust-coloured or orange spots on the leaves of your rose bush. As the disease spreads, these small spots will continue to increase in size. The spots on the canes will start off orange but as the season progresses to autumn or winter they will blacken. Leaves that are suffering from the infection will become dry and twisted and the spots will continue to darken until the plant either loses all its leaves or dies. This kind of disease can vary from mild to severe depending on how early the infection began and in which season.

If left untreated, the rose bush can also produce black teliospores which will survive the winter but continue to produce new infections as soon as spring hits.

As soon as any sign of rose rust appears, the infected stems and leaves must be promptly pruned using the correct pruning method. Any infected stems or leaves you remove from the rose bush must be destroyed and taken away from your plants to avoid reinfecting your roses.

You can also apply a fungicide to help treat rose rust in spring before the overwintering spores appear. If you do choose to use a fungicide, be sure to cover all the leaf surfaces.

How to Prevent Rose Rust

When planting your Rose bushes, make sure there is enough space for them to grow freely. Roses which are cramped will struggle to allow air to circulate, consequently providing a moist environment in the foliage which is the ideal breeding ground for rose rust to grow.

If your rose plants do become overgrown, then be sure to keep on top of pruning them to allow for air to move through the plant. If you see any symptoms of infection then prune the infected stems and leaves straight away to prevent the entire rose bush from becoming infected. 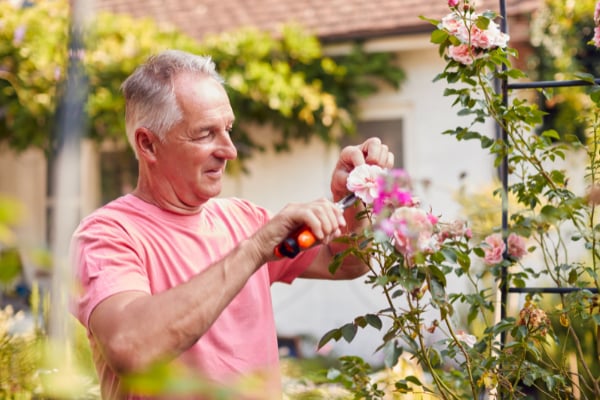 When you are working on your roses, always use clean sheers to avoid cross contaminating other rose bushes. Sheers that may have touched an infected plant have the potential to spread that disease to other rose bushes. As spores are more likely to infect your rose plants when the environment is moist, always water your roses at the soil rather than directly on the foliage. Only cut your roses when the temperature is dry as this will help prevent spores from travelling to your other rose bushes.

Rose rust isn’t the only disease that can harm the growth and appearance of your roses. Be sure to also keep an eye out for black spots, powdery mildew, pests and more.

If you’re looking to prune, groom, or grow your roses, Garden Express has all your green-thumb essentials to keep your garden looking fresh and growing healthy.