Home » Calla Lily vs Arum Lily – Can You Tell the Difference?

Even among seasoned gardeners, many people don’t realise that calla lilies and arum lilies are not one and the same plant.

Although the two are related and bear a strong resemblance, they differ in some important ways. In determining which is best for your garden, it’s worth knowing what these differences are. 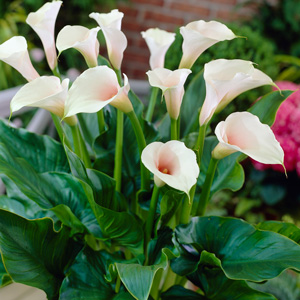 Arum lilies (Zantedeschia aethiopica in the family Araceae) are handsome and unusual plants. Their ‘flowers’ are actually a long, pointed spike (or spadix) made up of many small flowers, surrounded by a large, gracefully formed sheath called a spathe.

Their elegant colour palette includes white, pink and green, and they come in a variety of distinct and unusual forms. With other Arum species displaying near-black and chocolate brown “blooms”. They grow well in shady, wet areas such as pond edges, being happy with wet feet, and can multiply rapidly when left undisturbed.

For this reason, they have the potential to become invasive around waterways and sensitive natural vegetation. In some parts of Australia, the species has become a problematic weed in watercourses, wet pastures and heath ecosystems, displacing native flora and disrupting local ecosystems.

Even in areas where this problem has not been registered, it’s recommended that seed heads be removed after flowering and disposed of responsibly. 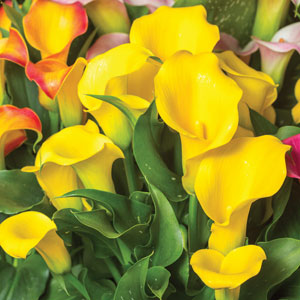 Calla lilies are hybrid varieties of Zantedeschia, so it makes sense that they’re often mistaken for arum lilies. Unlike the latter, they don’t thrive in shaded, wet areas, preferring plenty of sun.

They also tend to be smaller plants that multiply less readily, so they do not present a threat to native ecosystems in the way that arum lilies have the potential to do. Calla lilies come in a huge range of beautiful colours, from juicy mango shades to vibrant pink to deep, dark purple.

The easiest way to learn the difference is to compare the selection of arum lilies and calla lilies in stock at Garden Express. While you’ll need to take a little more care with arum lilies (or avoid them altogether in the parts of WA where they’ve been declared a pest), they remain a beautiful addition to many Australian gardens. Whichever variety you choose, you’ll be rewarded with a striking and unusual display come summer.

Are All Agapanthus Plants Invasive?
Top Drought-Proof Plants for Summer