What is Woolly Bush?

Woolly Bush (Adenanthos sericeus) is an upright evergreen native shrub. It is part of the Proteaceae family and is native to Western Australia. The Woolly Bush is mainly grown for it’s foliage which is silvery green and has a velvet soft texture. Through out most of the year it will produce small, bright red flowers. The Woolly Bush prefers a full sun position in the garden that has well drained soils. They are drought tolerant once established.

Woolly Bush are low maintenance and requires very little water once establish. They are ideal for mixed gardens, windbreaks, a soft screen or coastal planting. Woolly Bush are a great feature shrub and can be planted in large pots and containers. They are an excellent native alternative to a Christmas tree. Woolly Bush attracts nectar feeding birds into the garden.

How to Grow Woolly Bush 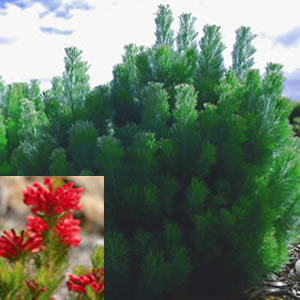 Cool to Mediterranean. They don’t like humidity and would rather have dry Summers.

When To Plant Woolly Bush

They require well drained soils with plenty of organic matter mixed through. This ensures access to moisture is maintained without any water-logging.

How To Plant Woolly Bush

Plant in full sun, 2m apart with the plant crown at soil level.

Water well until established then water very littler. Regular rain fall will be suffice during the year but you will need to water it during long dry periods.

Tip pruning to keep the plant in shape. Prune only lightly as it will not recover well if cut back hard.