Nandina (Nandina domestica) also known as Japanese Sacred Bamboo, Heavenly Bamboo or Sacred Bamboo is a small evergreen shrub. It is part of the Berberidaceae family and is native to Japan and China. Although called “Bamboo” in its common name the Nandina isn’t a bamboo at all and does not have the invasive root system. Nandina are generally grown for its foliage which come in a variety of colours depending on variety. Nandina Nana has lime green foliage which turns crimson red in Autumn, Nandina Gulf Stream has bronze to green foliage, turning brilliant red in Autumn while Nandina Summer Sunset has lime green to burgundy red foliage. They usually form a round to mounding compact habit. Nandina are suitable for a full sun to part shade position in the garden with well drained soils. The foliage will display better colours when grown in a full sun. They are frost and humidity tolerant and requires little water once established.

Nandina are hardy and low maintenance evergreen shrub. They are ideal for hedges, borders and rockeries for a splash of contrasting colour. They are also suitable to be grown in pots. It is excellent for an oriental garden theme or grown in a cottage garden or woodland areas. Nandina looks great when mass planted.

How to Grow Nandina 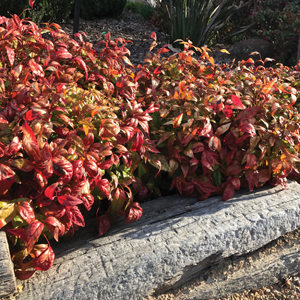 Sizes vary. Below are some examples.

When To Plant Nandina

They tolerate most soil types but generally prefer soil that are well drained.

How To Plant Nandina

Plant in full sun to part shade position. Plant in soil the same level as it is in the pot. Planting width will vary depending on the variety.

Mulch to retain moisture in the soil and suppress weeds.

Fertilise in Spring with a slow release fertiliser.

Prune as required to promote new growth and to shape.